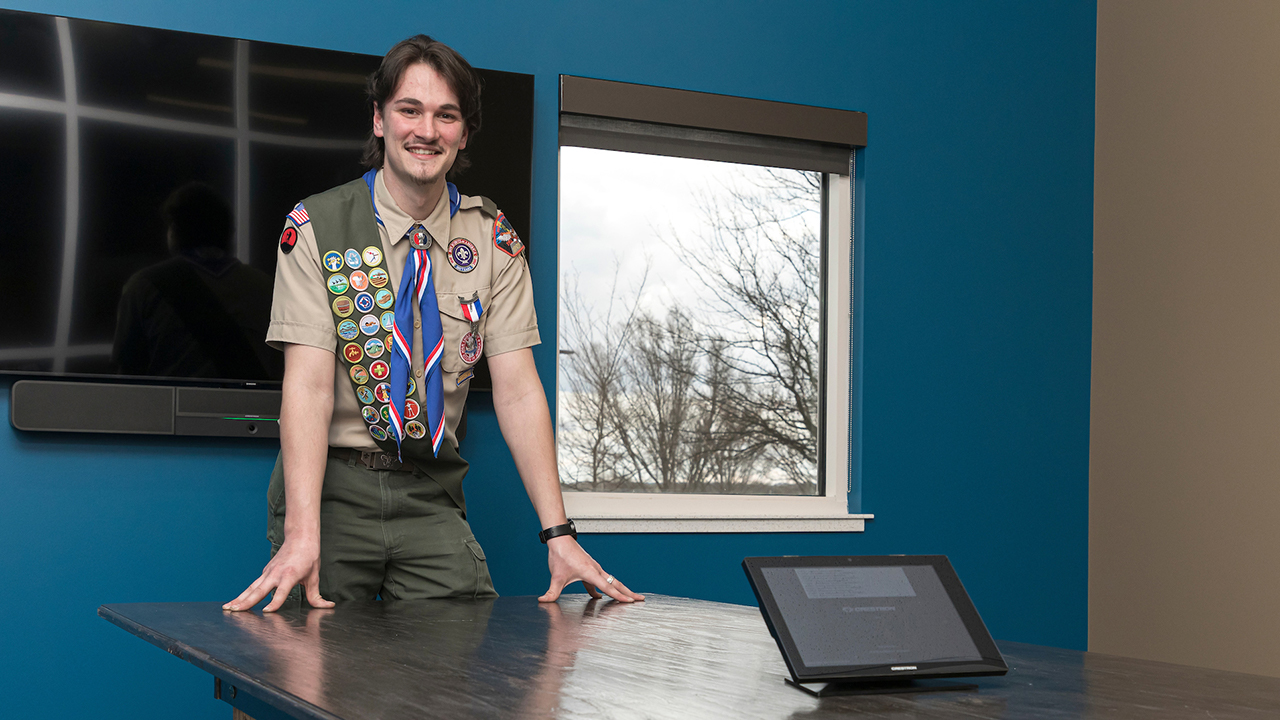 Asbury opened its brand new Asbury Students Center on February 28, part of the “Better Together” campaign. The new building is sporting some special touches from former Asbury Students graduate, Alex Etchison, who made furniture that is being used in the building.

Alex is a 2020 high school graduate and an Eagle Scout.

He built a 10-foot long conference room table and three coffee tables for the new student center as part of his Eagle Scout project. He has been a Boy Scout for 11 years and actually started in Asbury’s troop when he was in first grade.

“Once I got started, I realized that I loved the outdoors, the working with my hands, and the learning aspect of it. It all led me to stick with it all the way through,” Alex said.

Alex has been a member of Asbury since he was a baby and recalls beginning a relationship with Christ in middle school at disciple camp. Before attending Asbury Students, he didn’t fully understand the importance of a relationship with Christ. But after attending Asbury Students throughout his time in school, Alex said he learned much more about Christianity and the love of God.

“I met some of my closest friends and my greatest mentors through Asbury,” he said. “Without them, I definitely wouldn’t be who I am today. They’ve changed me in such a positive manner and they’ve helped me define who I am as a person and who I am as a Christian.”

So, when he saw the opportunity to give back to Asbury with his Eagle Scout project, he took it.

“The Eagle Project is supposed to be for a nonprofit and it’s supposed to be something that could benefit or assist them in whatever way your project can,” Alex said. “I knew that Asbury was starting the new building and I was hopeful there was something I could do for it.”

“He was a jack of all trades, really. He could do pretty much anything he set his mind to,” Alex said. “I asked him to give me some knowledge and some help with the building of the tables and he was very willing and grateful to do so.” Goforth recently passed away and Alex said he wants to get a plaque to dedicate the tables to him.

“I really could not have done the project without him,” Alex said. “He was a great mentor and a great man. It was very unfortunate and sad when he passed. I want to give him the credit I feel he deserves. He was probably the most God-driven man that I’ve ever met.”

After completing his Eagle Scout project with Goforth, Alex believes the new building will be beneficial to the church.

“Now having the student ministry building as a part of Asbury not only makes things easier, but I think it will help the different age ranges at Asbury grow closer together. I think it’s very important for incoming students to really give it a chance because I think it can really change someone in a great way.”